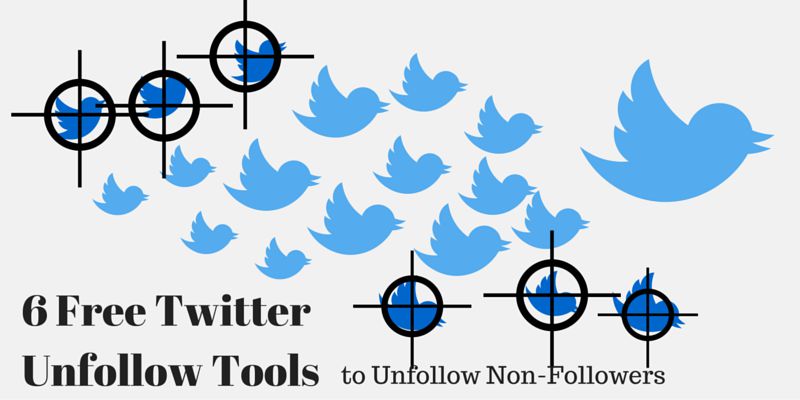 Twitter is a great marketing tool for your blog or website when used regularly to promote your content. But it can be a time drain if you don’t have enough followers to justify your efforts. Today I’m looking at 6 Free Twitter Unfollow Tools to ensure you’re building your Twitter account the right way.

You see it’s easy to get carried away and follow people in the hope that they’ll follow you back or at the very least notice you even exist, but this method has its pitfalls.

To start with you’ll end up seeing too much twitter noise and won’t be able to effectively follow anyone’s conversations and worse still every conversation will just seem like a moment in time.

This makes it hard to build rapport with the people you are following in the hope they’ll follow you back.

Your Followers-Following ratio is also going to look bad as your Twitter Authority increases when you have more followers than you are following.

You should be asking the question – “Who’s not following me back on Twitter?”

So your best solution is to unfollow those people that haven’t taken an interest in you and followed you back. Then at this stage, your Followers-Following ratio will, at least, be neutral and you’re heading in the right direction.

Fortunately, there are many Free Twitter Unfollow Tools you can use to set the balance right and to clean up your mess.

But before you start unfollowing people you just need to decide:-

Once you’ve answered those questions you can go forth and Unfollow. Here’s a few popular Twitter Unfollow Tools you can use to help you unfollow non-followers:-

Tweepi’s simple interface makes cleaning up your Twitter non-followers really easy. Tweepi’s Cleanup enables you to filter out inactive and unwanted users by allowing you to sort out the wheat from the chaff.

Twitter users who are inactive, never engage or simply spam you should be targeted first. Use Tweepi’s Free tools to line them up and then you’ll need to go through them manually, unfollowing at will.

Tip: Avoid following new accounts with a Twitter Egg as an avatar. These might be setup to SPAM you later.

Although this is a free tool, the Premium version offer much more flexibility in managing you accounts.

This free unfollow tool is quite handy allowing you select from multiple Twitter accounts. ManageFlitter’s unfollow tool allows you to reveal who you’ve followed and who’s not following you back.

The tool also shows which accounts are inactive and which have no profile image, which is handy because these could be fake accounts and you’ll want to get rid of these too.

Now, this tool does take a bit to load but it’s gathering a lot of data for your to play with, so it’s worth the wait.

This is another useful unfollow tool and like the others, it offers so much more.

Overall this product has an easier to use interface to use than Twitter and you can really unlock the power of your twitter account. Plus you can unfollow 100 people per day, which suits most people.

Tweeter Karma is the Grandaddy of them all and back in it’s day, was one of the most powerful Twitter unfollow tools available. Don’t be fooled by it’s basic interface as it still gets the job today, albeit by working within the restrictions Twitter has placed on it.

If you are looking for a basic tool that will just get the job done then, this might be your type of Twitter unfollow tool. 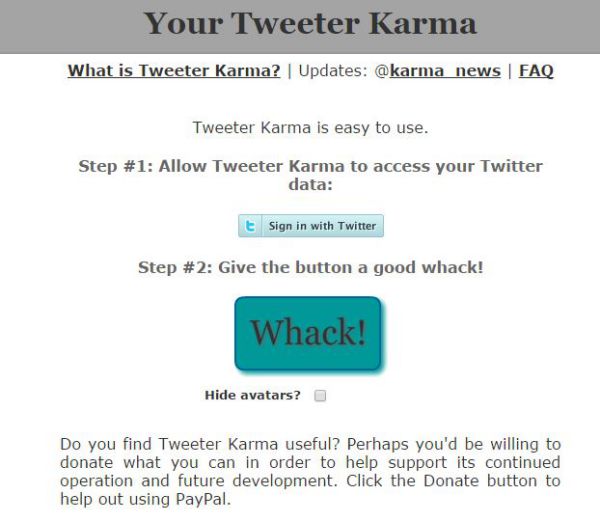 CrowdFireApp was formally known as JustUnfollow, and is one of the best free unfollow tools available. But like with most of these products you can only follow-unfollow 25 Twitter accounts per day, which if you are into serious about account building might be a little limited.

They do however a neat mobile app for iOS and Android that you can use for Account Building on the go.

But I’ve left the best until last, IMHO. Unfollowers is one of the first Free Twitter Unfollow tools I used and I keep going back to it because of the intuitive interface and many built-in features. 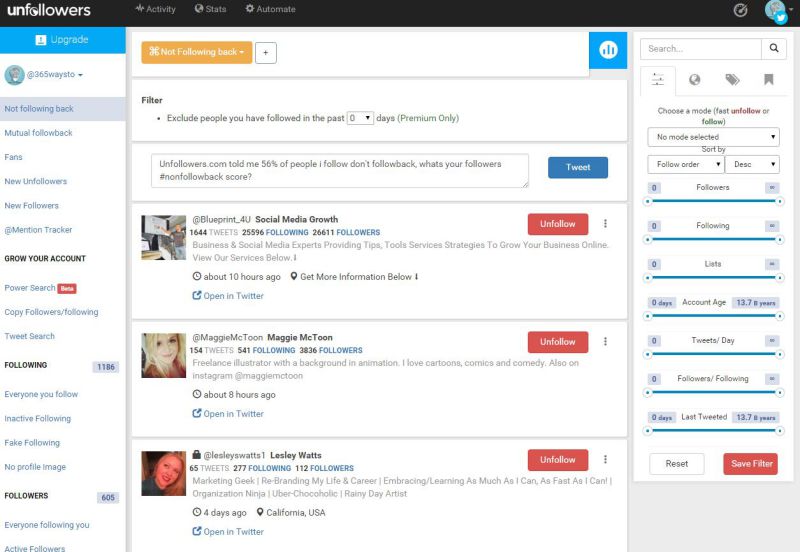 With Unfollowers, you can check for:-

And so much more.

It really is the complete tool and most of those features are available for free and with a 100 follow-unfollow limit. Although the premium upgrade starts at $9.90 for 2 Twitter accounts so it’s not going to break the bank if you decide to upgrade.

Twitter Hack: Although these products have limited free features, there is nothing stopping you from using each company to do a little bit of work in each account.

So now you’ve managed to clean up your mess, you’ll want to start growing your Twitter account. And unless you are already hugely popular, you have two choices:-

Active Growth – Aggressively grow your account by following people and unfollowing those who don’t follow you back.

The follow-unfollow strategy is a method to actively grow your account. The fact is if you just simply follow people, approx. 15-20% will follow you back, regardless of their interest in your Twitter feed, so we’ll use that fact to our advantage.

Here are the simple steps for the Follow – Unfollow Strategy:-

I’ve described this in the preceding paragraphs, so you’re trying to get your account to a baseline and a neutral follower-following ratio. Unfollow all non-followers to make this process easier. You can add the accounts you seriously want to follow later.

What you are looking for here are Twitter accounts that might be interested in what you have to say. So look no further than your competitors or people of Authority within your niche.

Just head over to their accounts and click on their followers tab.

NB: You don’t want to do too many follows in a short period of time or Twitter might suspend your account. I find 200 follows at a time is manageable and doesn’t attract much attention.

Now once you added a few followers to your list sit back and wait for your share of follow backs to occur. I usually give them a few days before moving onto the next step.

Tip: To get more follows, try ‘liking’ one of their tweets or better still give them a retweet. This activity usually gets you another 20-30% follows.

Finally, when the dust has settled you go into your Twitter account, click on ‘Following’ and then unfollow anyone who hasn’t followed you back. Fortunately, Twitter organizes these accounts in chronological order so the peeps at the top of the list are the ones you recently followed.

Then you Rinse and Repeat until you reach your desired goal. I’m currently taking one of my Twitter Accounts to 10k followers using this method.

Of course, there are quicker ways to do the follow – unfollow strategy, and most of the products above have follow-unfollow features, but these are usually restricted unless you buy into their premium offering.

If you’re full time on Twitter  to promote your blog then for sure, jump into a Premium product and take full advantage of all the Twitter account building tools available.

There have been some serious changes to Twitters Terms and Conditions to stop automated account building so most of these unfollow tools are restricted in some way or another.

Currently, it’s not possible to remove or unfollow everyone on Twitter with a single button although manually doing it is possible.

But you’ll want to do this overtime or risk getting your Account suspended by Twitter. Most Premium follow-unfollow products will notify you when you’re reaching Twitter T&C limits to protect you from account bans.

So if you are trying to impress someone with an account that has many followers and you only follow a few, to fool someone into thinking you have celebrity-like status you better be quick, because people using the follow-unfollow strategy will be unfollowing almost immediately.

Proceed with caution as you are walking a fine line, unfollowing everyone on Twitter.