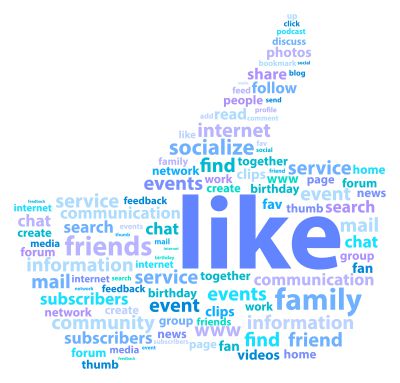 Comments are the life blood of a blog and yet it’s taken me several months to implement a comments system, why?

Although I cherish the engagement opportunities that commenting brings, I also know that moderating comments can be a huge time suck and I just wasn’t prepared to commit any time during the early stages of this blog. I had a plan and it required my laser-like focus. However, that plan has changed since I discovered the Facebook Comments Plugin.

Registering for comments on a blog is a total pain in the arse and it seems like each blog has chosen a different path which amplifies this problem. So what is the best WordPress commenting system available? Here are a few your options you may have considered for managing your WordPress Comments.

Yes, by default you have a basic commenting system and you’ll want to disable those comments shortly after launching your blog. Why? Because they suck and also require another plugin called Askimet to filter your SPAM from day one. Although this has a low barrier to entry there are much better options to choose from.

Yay! for Disqus (pronounced discuss) and their off platform comment system. Plenty of bloggers swear by this commenting system and yet for me it’s a subculture and a distraction for your true audience. It’s hard enough to get people commenting let alone forcing them to register for yet another commenting system, don’t you agree?

This hardcore commenting system is perfect for those blogs who have already found their 1000 true fans and know they’ll bend over backward to make a contribution. For the 99% rest of us, this commenting system is best kept on the shelf until you are so popular, you are prepared to turn some engagement away.

Never heard of it, well I’m not surprised.  It’s another commenting subculture and this one actually costs you money to implement. It certainly attempts to lower the barrier to entry by allowing to users to login via Facebook or Twitter but is more complicated than you’ll need.

I’ve added this one with reservation because at the time of writing, the jury is out on whether Google+ has any life left running through it’s veins. Google recently announced a separation between Google+ and other social network features which make discontinuing it a real possibility IMHO. Netherless until they do, it remains a viable option due to large numbers of registered Google+ users.

And I’ve left the most interesting WordPress Comment System until last because this is the Big Momma of social media interaction. Approx, 70% of the Internet population have a Facebook Account and that’s a whole lot of potential readers isn’t it?

With Facebooks one account per person policy, you are more likely to avoid the trolls looking for easy anonymous commenting prey, and sure it’s not a perfect system, but I trust Facebook has a team of people actively banning accounts that break the rules. With that in mind, your attempts to fight comment spam has been made a whole lot easier.

So this is the comment system I am starting with on Start a Blog and I’ll see how it travels. Here is a brief demonstration video on how to install the Facebook Comments Plugin for yourself.

It’s fairly easy to add this commenting feature to your website and you can leave existing comments appearing on your blog although there is no current way to integrate them into the Facebook Open Graph.

One thing I’m always concerned about when adding new plugins is the effect it has on my website speed, which is a signal for Google Search rankings so I thought I’d do a quick before and after test to see if there was any change.

First I used a website speed checker called Pingdom and took some snapshots before adding the new plugin and after. Here’s what I found… 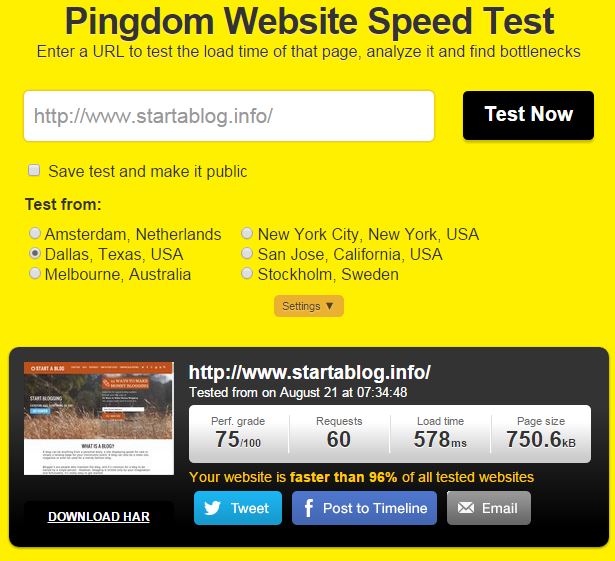 As you can see I pre-selected the location where the test is initiated from so I could ensure consistent tests are performed. Otherwise, a random location is selected which doesn’t help to compare apples with apples.

Anyway, the results are ok, and this isn’t too bad a performance considering it’s on a shared server.  I also took a snapshot of a popular page that will actually have the comments showing.

Then I installed the Facebook Comments Plugin and tested these results again.

I am looking for a dramatic variation in results, based on the expected load times of the Facebook plugin and subsequent connection to Facebook.

Here are the same tests again.

Whoa! back there, this is worse and I don’t even have Comments appearing on my Home Page. Further investigation showed the server was having a moment and the first 2 seconds were just the connection. Ouch!

So I tried this test again

And got similar results as my baseline test so I moved onto the real test page. The one with the Facebook Comments Plugin.

It showed a slight delay in load times but on closer inspection these delays weren’t because of the Facebook Plugin. Apparently my Aweber and Themify themes lightbox were chewing the time. These are now on the list of things to look at.

Ok, it’s not an exact science as there are so may other variables to consider, but it was important to note that Facebook Comments weren’t going to hold my blog back. In fact as a bonus I can remove the Askimet Plugin and also a Facebook Like plugin I’d been using with a limited success which could actually help the websites performance.

So it’s onto a new era of Facebook Commenting and at least I know the Facebook traffic I’m sending to my blog will be given every opportunity to comment on the articles they like without having to jump through numerous hoops.

Happy commenting and why not test out the new comments for yourself. I’d appreciate the share and as a bonus you can comment as your Fan Page and not your personal account, again reducing the commenting friction.

How to Increase Blog Traffic for Free

Do you know these royalty free music sites? – Updated 2017

Are you looking for royalty free music sites for your current video project? Sure there are plenty of ways to download ‘free’ music but you don’t want to get caught in a costly legal battle or worst still have to back pay royalties to the owner of the music you’ve used. You should always make […]

Renew and refresh your old blog posts in 2017

If you’re like me and have some old blog posts that aren’t performing well in Google Search you can renew and refresh your old blog posts and get them back in front of Google and your readers. You see unless people actually use the search button on your website they might never find the awesome […]