How to Stop Analysis Paralysis 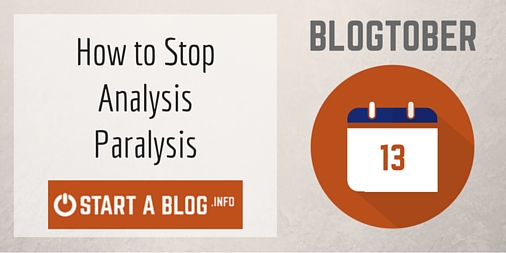 Nobody likes the feeling of being wrong so instead would prefer to deliberate over the outcome for days only to discover they could have made a better decision anyway. Sound familiar?

Well, this is a classic case of Analysis Paralysis.

Imagine you’re working for the bomb squad and have to disarm a deadly weapon, and have to choose between cutting the red wire or the blue wire. The timer is counting down and you have to decide quickly. Which wire do you cut?

Again this is analysis paralysis and you want to make sure you’d you at least cut one wire before the countdown reaches zero, right?

It’s no surprise in movies you see the very same indecision and eventually they cut a wire with seconds to spare and usually it’s the wire they were first thinking of. The same happens in our everyday lives, and despite the deliberation we usually end up going with a gut feeling anyway.

How To Stop Analysis Paralysis

#1 – Determine the size of the problem

All situations are not equal and neither are all problems so first you must decide whether this is a small problem or a large problem. Both don’t deserve the same amount of time or attention, so first you need to work out how big this problem really is.

Consider such things as:-

If the problem isn’t important, you would probably make the same decision later and if you don’t even now the worst thing could happen then you’ve got a small problem on your hands.

No being able to qualify these questions is a sure sign it’s a little problem and you should move on.

Would you allocate the same amount of time and energy into buying a new house as you would choosing the color of paint for the walls ? Of course not, so spend relative amounts of time on each decision.

Similarly, do you spend more time deciding on a blog topic than actually just writing about it?

Learn to understand where you’re wasting the most time and put a time limit on making a decision. Big problems need more time and little ones deserve very little attention.

During the decision-making process, you’ll likely discover a few options and the more options you have, the harder it is to decide. Eliminate the poor choices and get that list down to just a few solid choices.

If you can’t decide if you’ll pick A or B then just ask someone you trust. And when I say trust I’m talking about someone who’ll give you a straight answer without the fluff.

You certainly don’t want to ask someone who thinks they are telling you the answers you want to hear. If you can’t contact someone you can trust then try someone in your tribe or spend a few dollars on Amazon’s Mechanical Turk  and find out what real people think.

Just like the Red Wire, Blue Wire scenario, you’ll eventually have to pick one. Make the choice swiftly and you’ll save some time for other more important tasks.

Pick one and don’t look back.

#6 – If all else fails then delegate

If you suffer badly from Analysis Paralysis then perhaps you need someone else to decide. Hire a professional to make the decisions for you, so you can concentrate on the work you love. Alternatively you can turn to your tribe and let them decide the answers for you.

Create mini polls or competitions to encourage engagement within your tribe.

I’ve just finished writing this blog post and now need to find an awesome headline that works. Let’s put these 6 steps to the test.

#1 – Relative to the writing of the post this is a small decision.

#2 – I wouldn’t want to spend more than a quarter of the time on this decision (15 minutes max.)

#4 – I asked a friend and they were more interested in ‘Stopping Analysis Paralysis‘ rather than avoiding it. Given I trust them to give me a straight answer, I am ready to decide.

#5 – I’ve picked ‘How to Stop Analysis Paralysis‘ because it’s short, addresses a want rather than a need (good copywriting), my friend preferred it and my gut feeling says it’s good.

#6 – And if I wasn’t able to decide then I could let someone else decide for me or use a tool that uses rational decision making. In this instance, I could have used the AMI Headline Analyzer tool and let it make the decision for me. For the record ‘How to Stop Analysis Paralysis‘ had the highest EMV of 40%.

the decision making in your head. My personal mantra is ‘keep moving forward‘ because you’ll eventually get to where you are going.

Do you suffer from Analysis Paralysis? Do these steps help you in any way? Please share your thoughts in the comments below.

Treat your blog like a business, not a hobby How to Host a Blogging Party

How to Increase Blog Traffic for Free

Renew and refresh your old blog posts in 2017

If you’re like me and have some old blog posts that aren’t performing well in Google Search you can renew and refresh your old blog posts and get them back in front of Google and your readers. You see unless people actually use the search button on your website they might never find the awesome […]

Should you buy a dot Blog domain name for your blog?

Recently Automattic, the company behind WordPress.com, released .blog website extensions into the public domain, but should you buy a dot Blog domain name for your blog? Firstly let me clarify that WordPress.com is a commercial company and probably not the company you are using to host your Blog. It’s likely you’re are using WordPress.org which […]